Welcome to my new followers – it is lovely to have you on board – I hope you enjoy the journey.

On Tuesday DH and I met with friends of mine who happened to be on holiday up here and had lunch together at Castle Kennedy Gardens in the revamped tea rooms, one of my most favourite places – so loved by my family that my daughter held her wedding there in 2016.

After a lovely meal and a good old natter we said our goodbyes to my friends and popped down the road into Stranraer for a bit of shopping – when I say shopping we actually bought a bottle of gas for the caravan and a few groceries – nothing more exciting.

It was still quite mild and quite calm so we decided to have a walk on by the harbour, through Agnew Park and out on the Broadstones Road – which runs along the side of Loch Ryan.  This is a short stretch of some rather lovely big old houses with well-kept gardens and a view across the bay. There is often a lot of ‘remodelling’ going on as places change hands and I do love to have a bit of a nosy!

Everything is beginning to feel cooler and a bit grey as you can see from the photos – but I actually quite like this as it makes it quite atmospheric. 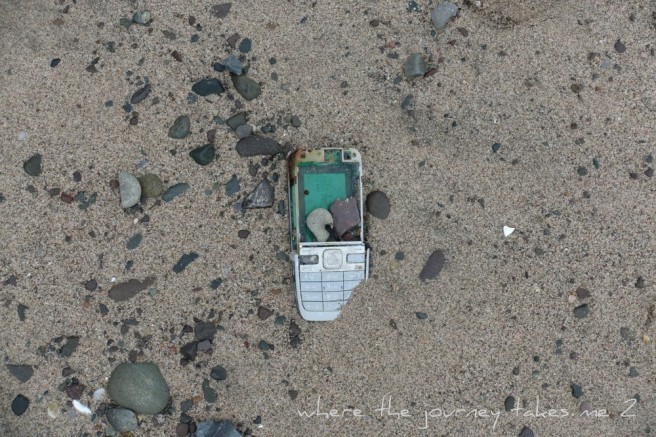 It was good to be out, strolling along on the shore spotting bits of coloured glass and other things –is this is the new message in a bottle – message on a mobile? 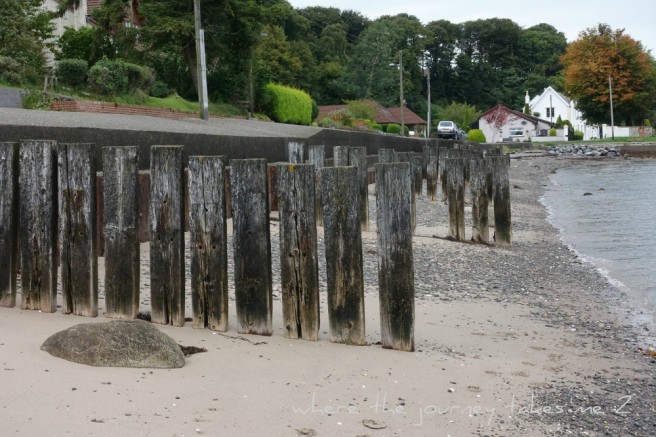 On the way back to the car the heavens opened and we had to make a run for it –  but it was nice while it lasted.

Wednesday was a bit wilder – I was expecting worse – we had battened down the hatches ready for the forecasted storm.   It was certainly blustery here on the Mull of Galloway and the sea very choppy, and although the caravan rocked a bit it was not as bad as the rest of the county – some places across the bay had no power and quite a bit of damage.

By the afternoon it had calmed down enough for DH to go outside and make a start on washing down the caravan ready for the winter – I believe it is called ‘winterising’  I even did half an hour weeding in one of the borders when the rain suddenly came lashing down and the wind picked up once again.

Then as quickly as it came it settled again and after tea we even managed a brisk walk – all togged up in my fleece lined Parker, woolly hat and a scarf and by choosing the more sheltered path to the village down the low road we kept relatively warm.  As you might expect the place was deserted – I expect most of the villagers were keeping snug and warm inside (very sensible).  Once back at the caravan I had a nice mug of hot tea and some ginger cake.

Today we were back to calm, very calm; the sea had hardly a wave and nothing stirring in the garden. We drove into Stranraer with a trailer full to the brim with bags of weeds from our last visit to take to the tip.  I also took a box of bits and bobs from my recent decluttering to the local Red Cross charity shop, bought some fresh rolls and milk and the Stranraer Free Press (to get the local news) then came home for lunch.  I have acquired a taste for Tesco’s fresh Cheesey rolls which we had with salad inside and I also bought one of their boxes of 5 assorted mini Danish pastries – five being an odd number for two of us we have to share the last one, or fight over it!

After lunch DH was back to washing  another side of the caravan and I started on the weeding again – pulling out a million tiny seedlings (I exaggerate not!) that have taken root since our last visit – but only after going down to the beach to take a few more photos. 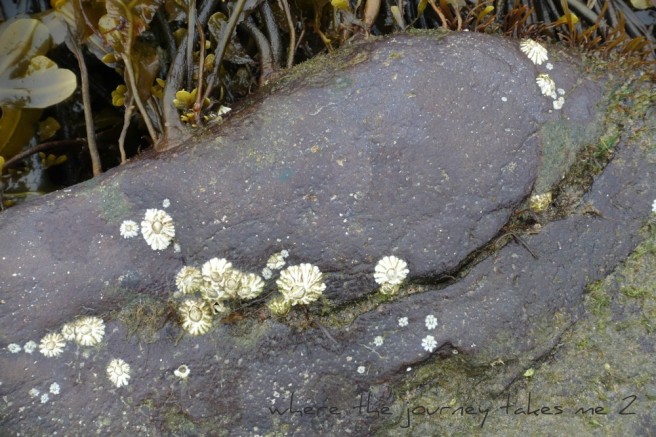 I can hear rain again now outside as I write this – who knows what we will wake up to tomorrow.  Just in case I cannot go out in the garden I have brought one or two projects with me to be getting on with.

Have a good day x

2 thoughts on “bEAching ~ calm after the storm”