On our journey up to Scotland on Thursday we crossed the Scottish border and decided to look for somewhere to pull off the road to have our packed lunch; so we took a detour through Gretna town centre (about 5 shops!) and out on the tourist route (avoiding the busy A75), ending up at Dornock a tiny village about 6 miles down the road. Not to be confused with Dornoch.

We randomly chose a road to turn into to the left of the main village road (Church Road) and stumbled upon this little church.  After eating our sandwiches I went off to explore. 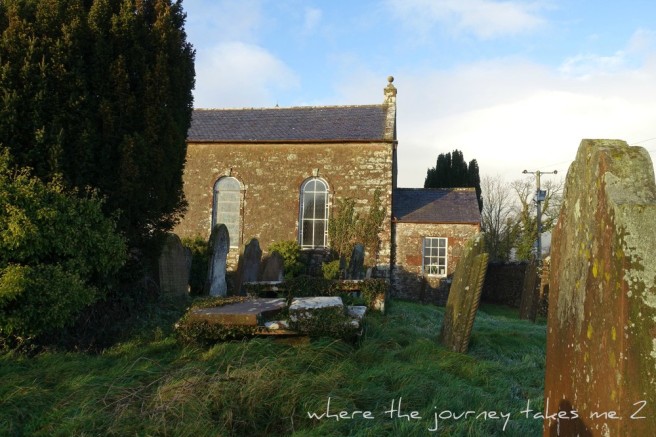 At first glance it wasn’t obvious that the church was still in use but further investigation told me it probably was (and of course Google helped later).  It is a listed church dedicated to St Marjory and built in 1793 on the site of the initial medieval church that was knocked down and of which there are no remains.

The church forms a T shape, built of sneck harled rubble (I got that off Google – I am no expert on stones!), the porches were added on at a later date. It has round-headed windows and two of them are stained with glass designed by Ballantine and Gardiner of Glasgow (in 1843 they won a competition to design windows for the new Houses of Parliament, although in the event they only provided some windows for the House of Lords).  We couldn’t go in the church to see the windows but they look quite intricate from outside and the windows are covered in that shatter proof plastic sheet so they must be quite important.

The bellcote, also added later in 1855, and which I inadvertently chopped the top off in the photo has no bell as strangely the bell lies in the Sanctuary at the doorway of another church in Bowness on Solway; taken by the English in retaliation for the Scots pinching their bell which now lies in the Solway!  A bit of tit for tat.

One of the things that struck me wandering around the graveyard is firstly that it is such a wild yet beautiful graveyard, so peaceful with a view that stretches over to the Solway estuary in the background.  The second thing is the sheer size of all these 18th Century grave stones that are packed into this graveyard and almost towered above me and more resembled one of those large city cemeteries than a tiny parish church. All around the graves the grass was long underfoot and difficult to walk over with mounds and clumps entwined with brambles.

These two graves I came across are a sad reminder of how children often died young through infectious diseases that couldn’t be cured back then and how some families lost more than one child at the same time with the same illness.  This was written on the gravestones…

The stone on the right is simply inscribed:-
Here lyes Thomas
son to John Turn
bull in Longland
Who died young

What a truly peaceful place to sit and ponder on life…

What a shame we couldn’t linger any longer but we will go back as I have read on Google that somewhere amongst all those grave stones are 3 Hogbacked gravestones (carved stones) with Viking links from when the pre-reformation Medieval church was in use and I am curious to see these now.

I also learnt from the internet that there is a Watchnight Service at 11.30pm on Christmas Eve – how I would have loved to be up here to go to that.

From the peace of the countryside we headed back to the A75 calling in at Castle Douglas for a chip butty tea and then on to the sleepy backwater market town of Newton Stewart to buy food from the only Sainsburys for miles.  They had just had their new Christmas lights switched on – my goodness they have really pushed the boat out this year!

I love that row of stars strung across the main street.  Tomorrow we are going into Stranraer to watch the Christmas parade and switching on of the lights in the town centre and see these Three Wise Men on their camels.  Can’t wait.

Our little village here usually has a Christmas tree but no signs of one yet – perhaps they are growing it still!